Blog #2 – The Diversity and Key Characteristics of Citizen Ownership

Citizens’ empowerment and participation are seen as strategic to meeting the EU’s energy targets [1]. In line with this, the new EU Renewable Energy Directive and Electricity Market Directive include definitions for “renewable energy communities” and “citizen energy communities” respectively and are expected to promote the implementation of renewable energy projects with open and participatory forms of citizen ownership in the EU Member States. Citizen ownership is already common in some EU countries, but quite uncommon in some others [2]. Furthermore, citizen ownership is very diverse. Therefore, lack of awareness about the multiple citizen ownership models that already exist and their particular qualities is normal and very understandable. In this blog post, I will introduce the diversity of citizen ownership and the importance of understanding the key characteristics of the different models. This is expected to be relevant for policy-makers, practitioners and researchers.

Why is citizen ownership so diverse?

Hicks & Ison [3] argue that “context and motivations [..] form the foundation of a project and influence decisions made in other areas, leading to a range of outcomes”. Those decisions include choices about e.g. activity, technology, scale of project, governance structure, legal form, financial models, distribution of benefits, level of engagement of local community, etc. [3–7]. Moreover, van Veelen’s analysis about Scottish local ownership of energy [4] shows the ability of citizen ownership to adapt to changes in contextual factors and address new motivations. As result of the multiple and changing contextual factors and motivations, citizen ownership is very diverse.

Citizen ownership of energy (often referred to as community energy) has been associated with multiple qualities that may support energy transitions (e.g. local acceptance of new energy infrastructure) and address some social challenges (e.g. regeneration of the local economy and affordable energy prices for consumers) [8–13]. Therefore, citizen ownership has attracted remarkable attention internationally and literature on the phenomenon is rapidly increasing. However, not all citizen ownership models provide all the benefits usually associated to community energy. Consequently, overlooking the key differences may lead to ineffective policies or project strategies.

What citizen ownership models exist and what are their key characteristics?

The citizen ownership models that are introduced in the following are based on an analysis of the Danish wind turbines and district heating companies’ ownership for the period 1976-2016. The analysis discerns three distinctive key characteristics for the citizen ownership models presented in Figure 1: (1) local − distant, (2) inclusive − exclusive and (3) common good – limited private profit – unlimited private profit. 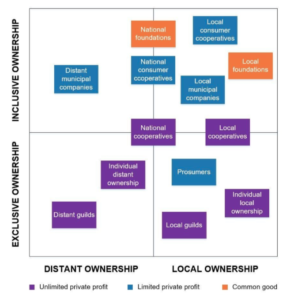 Inclusiveness is a characteristic that has commonly been associated with community energy and is a core value of cooperatives [16]. However, the idea is often implicit and not explicit in the discussion about ownership, which the authors of [17] see as problematic. Collective is not a synonym of inclusive −more than 60% of the wind companies with a collective citizen ownership in Denmark have five members or less [18]. The differentiation has relevant policy implications, i.e. when pursuing local acceptance or local development [8,12]. In this regard, it might be more relevant to ask what percentage of the local residents are involved in the ownership of a given project, rather than what percentage is owned by local residents; in other words, to focus on inclusiveness rather than on (collective) localism.

Special attention should be payed to some considerations about inclusiveness. First, distant inclusive ownership may exclude local communities if they are not engaged beyond what is required by law. An example is the case of distant municipal companies who invest outside their municipality. Excluding the local community may have negative implications for e.g. local acceptance. Second, not all citizens have the resources to invest in shares, which automatically excludes a part of society. Therefore, the open ownership of wind cooperatives is not completely inclusive. All in all, consumer cooperatives, local municipal companies and foundations are seen as the most inclusive citizen ownership models. To ensure the inclusivity of these models, boards ought to be formed carefully to guarantee proper attention to the interests of consumers and the local community.

To conclude, the citizen ownership categories presented in this post provide a new vocabulary to refer to citizen ownership and highlight distinctive key characteristics to be considered when analysing benefits of ownership or developing ownership specific policies.

The above text (with minor modifications) and the figure are extracts from the scientific article “The past, present and uncertain future of community energy in Denmark: Critically reviewing and conceptualising citizen ownership” produced by L. Gorroño-Albizu, K. Sperling and S. Djørup and published by the journal Energy Research & Social Science on 2019, volume 57. DOI: https://doi.org/10.1016/j.erss.2019.101231. The article is published under the Creative Commons Attribution 4.0 International License (CC BY)

If you have any questions of queries, please direct them to the author Leire Gorroño-Albizu or the ENSYSTRA Project Manager Dirk Kuiken or Deborah Groeneweg.