Energy systems in transition: A welcome to the ENSYSTRA project and a brief explanation of our research goals

Hello, and welcome to the ENSYSTRA blog!

In our first instalment of our blog, I want to provide a brief overview of our project and outline some of our research goals.

The aim of this blog is to communicate the research, ideas, and experiences of the 15 early stage researchers (ESRs) currently enrolled on PhD programmes working on the ENSYSTRA project, and to update you, the reader, on the progress of our individual and collective research over the coming months and years.

We are a project funded by the European Union’s Horizon 2020 research and innovation programme. Through this support, we aim to provide original insights into the energy transition from an interdisciplinary research perspective.

What do we mean by energy systems in transition?

ENSYSTRA is an acronym for ENergy SYStems in TRAnsition, which succinctly summarises the core research interests of our project.

When talking about energy systems this generally refers to all the components related to the production, conversation, delivery and use of energy. When talking about transitions, this predominantly refers to the long-term structural change in an energy system, typically presented as a decrease in the prevalence of one form of energy and an increase in another form – think increasing and decreasing shares of oil, gas, coal, and renewable energy in energy supply over the last two centuries.

It has become commonplace to assume that energy transitions are focused on a change from fossil fuels to renewable energy, and thus is viewed as a ‘sustainable’ energy transition. However, it is also important to bear in mind that technology that can help make fossil fuels cleaner, such as carbon-capture storage and utilisation, or hydrogen from gas, also has an important role to play in limiting greenhouse gas emissions and limiting global climate warming.

Learning how this transition is happening in the North Sea will provide considerable knowledge and insights that can be used to understand how energy transition occurs and how to speed them up. This perspective can inform on how other regions of the world may transition from fossil fuels to more sustainable energy systems, and thus, our project looks to have generic value when studying energy transitions.

Our project focuses not only on the sea region itself but also on the land next to it. The region, both on land and off, has tremendous potential for expanding sustainable energy forms, being one of the best-suited areas for large-scale wind energy in Europe, having significant potential for large-scale macro algae and wave energy, and with innovations in solar PV technology also increasing the potential for renewable energy generation onshore and off. Couple this with the large amount of existing energy infrastructure present in the region in the form of existing grids and offshore platforms, the market structures present there, and the political and legal systems that are also already established, the region presents an opportune case from which to study the energy transition.

How our research is structured

ENSYSTRA comprises 15 PhD fellows placed around six universities in Europe: the University of Stavanger in Norway, the University of Edinburgh in Scotland, Chalmers University of Technology in Sweden, Aalborg University in Denmark, Europa-Universität Flensburg in Germany, and the University of Groningen in the Netherlands. The research projects follow a central theme of studying the energy transition, but do so in an interdisciplinary way, comprising of four work packages (WP) focusing on policy and market design (WP4), actor behaviour and interactions (WP3), technologies and development pathways (WP2), and interacting with energy systems modelling (WP1). The following model shows the relation between the four work packages: 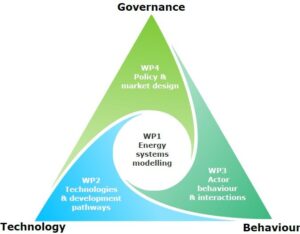 Our project is ambitious, having received an exceptional score of 96% from the European Commission. Our research looks at aspects such as modelling the whole North Sea energy system, simulating sustainable pathways of the EU-28 energy systems, looking at offshore advanced renewable energy technologies, energy efficiency and waste heat recovery. We also look at ownership models and energy security within smart energy systems, policy framework interactions to facilitate cross-border energy system transitions, and a host of other important research areas. Through this approach, rather than advance the importance of one way of thinking and doing research, we are able to acknowledge the vital contributions that so many fields have to offer to the energy transition. After all, if we are to seriously limit greenhouse gas emissions on the scale that is suggested by the Intergovernmental Panel on Climate Change and the Paris Climate Agreement, then we need think more critically than ever about how this can be achieved, and harness all the collective knowledge and tools at our disposal.

It is our hope that the ENSYSTRA project can serve to produce timely, relevant and quality academic research, but also, that the results and insights gained from our work can be shared amongst non-technical audiences, the wider public, and also scholars and researchers who are perhaps unfamiliar with other disciplines and the contributions they can make, providing original and innovative research related to energy systems and sustainable transitions.

We have an excellent consortium of talented researchers and industry experts already, but are always looking to engage with other knowledgeable and interested parties

If you have any questions of queries, please direct them to the author Benjamin R. Silvester, or the ENSYSTRA Project Manager Dirk Kuiken or Deborah Groeneweg.